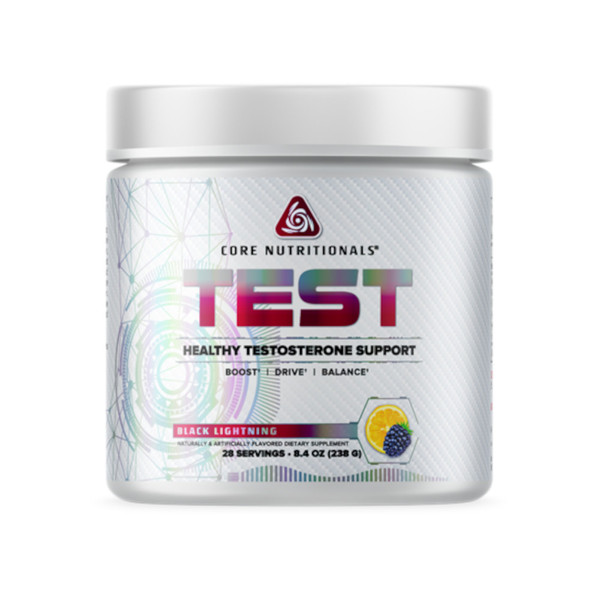 If you don’t know your best yet, you’ll certainly know it when Core TEST helps you reach it.

Being at your best, your peak, isn’t a subjective state of mind or a feeling one has – it’s a physiological state, a confluence of metabolic factors that result in the best, most peak, most alpha version of you stepping out into the world and into the gym every day. Are you doing what’s necessary to be there?

If not, then Core has your back with the newest evolution in healthy testosterone and male support: Core TEST. By now, you already know the drill: we take the best ingredients, backed by clinical research, and include them in serving sizes actually reflected in the literature. Core TEST is no different.

We’ve scoured the literature, alpha and beta tested more formulas than you can count, and eventually created a formula packed with actually effective ingredients targeting multiple pathways of healthy testosterone support. Calcium DAA, one of the best known support supplements on the market, backed by clinical research in humans. KSM66, an ingredient with a long history of use in traditional medicine now backed by an unimpeachable record of cortisol reduction, healthy testosterone support, and hormone optimization. We could’ve given you KSM66 and left it at that – the ingredient is that good. But we didn’t. We included Bulbine natalensis, Tongkat Ali, and a potent estrogen modulator in Pine extract to cap off the savagery. This is the best, most comprehensive, multi-pathway testostone support product on the market.

All in all, we have created a formula that you’ll know is working. If you don’t know your best yet, you’ll certainly know it when Core TEST helps you reach it.

D-Aspartic Acid, the d isomer form of the amino acid aspartate, is an amino acid that is found naturally in several endocrine glands, including the testes and pituitary. While the correlation between DAA and testosterone production has been clinically documented, research indicates several possible mechanisms for these effects.

It’s likely that DAA acts as a neuromodulator influencing several pathways that govern the reproductive system, particularly testosterone production. Some studies indicate that DAA’s concentrated presence in the hypothalamus, pituitary, and testes identify this protein as an up-regulator of gonadotropin-releasing hormone (GnRH), luteinizing hormone (LH), growth hormone (GH), and testosterone. Some studies have found that DAA also stimulates a protein called StAR. StAR is necessary for the cholesterol transport in the cell that is needed for testosterone production. Further, its role in modulating the sexual drive implicates DAA assists nootropic activity, supporting health levels of dopamine and serotonin. Balanced levels of dopamine and serotonin have a range of significant benefits.

The existing research in human males suggests these mechanisms of action have plausible, real world activity. A six-month trial in average men, for example, saw increases to circulating testosterone of 30-60%. The increase over baseline persisted for the entirety of the trial in certain subjects, suggesting that DAA does not lose its effects over time or with repeated administration.

Withania somnifera Dunal, colloquially known as Winter Cherry or Indian Ginseng, is an herb that features prominently in the traditional Indian medicinal system of Ayurveda. Known as Ashwagandha in Ayurveda, Withania somnifera is a critical ingredient in various Ayurvedic tonics and tinctures prepared as a traditional remedy for the treatment of various ailments.

Recently identified as a potent adaptogenic and target for therapeutic applications, Ashwaghanda has been the subject of numerous animal, pre-clinical, and clinical trials designed to examine its potential effects as an antioxidant, anti-carcinogenic, anxiolytic, antibacterial, antifungal, and immonumodulating compound. Ashwaghanda’s broad therapeutic potential is hypothesized to be the result of its robust phytochemical profile, including a wide swath of alkaloids, sitoindosides, and the highly biologically active withanolide group. As the principally biologically active compounds within Ashwaghanda, withanolides such as withanone, withaferine A, withanolides A, D, and G have been identified, isolated, and extensively studied in the various applications noted above.

In recognition of the potential physiological benefits of withanolides, Core Nutritionals selected KSM-66® to include in its HARD formula. KSM-66® is a full-spectrum Ashwaghanda extract, standardized for 5% withanolides – meaning that KSM-66® not only includes the full range of biologically active compounds within Ashwaghanda, but also that it contains the highest currently available concentration of the principally active withanolides (5%).

The high concentrations of withanolides within KSM-66® has resulted in encouraging results in a number of human, clinical trials – particularly considering many of these trials were conducted using the methodological gold standard of randomization, double-blind delivery, and placebo control. Amongst the most impressive results contained in these trials:

Though each of these results is impressive, perhaps the most significant for Core TEST is a study involving KSM66® and testosterone. 46 male patients were treated with KSM66® or placebo for 90 days, with measurements of serum hormone levels taken at the end of the 90 day treatment. The study established that 675mg of KSM66 over 90 days had a statistically significant impact on healthy testosterone production in males, as compared to placebo. The same study also found an increase in healthy production of LH (luteinizing hormone), suggesting that KSM66’s method of action is at the pituitary level.

To put it the simplest way possible, cortisol’s chief functions involve either turning on, or shutting off, the very things we as fitness enthusiasts want to avoid or turn on, respectively!

Bulbine natalensis is a herb endemic to Southern African that has historically been used as an aphrodisiac in traditional medicine preparations. Recent animal research has demonstrated that the herb has healthy testosterone supporting effects in rats and may also elicit positive effects on cognition.

In these same trials, an aqueous extract of the herb was found to dose-dependently lower estrogen levels in male rats. Research has not established whether the estrogen-lowering effects of Bulbine natalensis are a cause or consequence of its ability to support healthy testosterone levels.

The name Eurycoma longifolia is probably familiar to most within the bodybuilding and fitness community, as it has a long history of use as an aphrodisiac supplement. Also known as Tongkat Ali, Malaysian Ginsgeng, and Longjack, the herb is found in temperate regions of SouthEast Asia and has been used for centuries as an aphrodisiac in medicinal systems local to those regions.

Western research has begun to establish that Eurycoma longifolia’s does in fact have an effect on libido, at least in animal trials. Trials in rats have demonstrated Tongkat Ali increased measures of sexuality (mounting frequency, latency to ejaculation and partner selection), while in vitro assays have identified pro-erectile bioactive compounds.

Though more research is required to establish Tongkat’s aphrodisiac and/or pro-erectile effects in humans, the existing animal research is fairly consistent in suggesting the herb’s effects in these areas.

Abieta-8,11,13-trien-18-oic acid, more commonly known as Dehydroabietc acid or DHAA, is a terprene compound isolated from several plants and trees, including certain species of Pine. Certain assays have also isolated DHAA from resin of Commiphora myrrha.

While limited in amount, the research that exists on DHAA is promising. Prior to discussing this research, it may be useful to explain the research term IC50. IC50 is a measurement in estrogenic assays that describes the amount of a given aromatase-inhibiting compound needed to reduce half (or 50%) of the aromatase enzyme. The aromatase enzyme, in turn, is the enzyme responsible for converting testosterone to estrogen. The prescription drug Formestane, for example, has an IC50 value of 0.6 mu – with a lower value indicating a more potent compound. (The less compound needed to reduce aromatase by 50%, the more powerful it is).

DHAA’s IC50 value – according to the available research – is 0.3 mu, suggesting that it has potent activity against the aromatase enzyme. While the research exhibiting DHAA’s precise IC50 value is in vitro, animal research does exist to suggest a practical, real-world effect. Agricultural studies in fish examining DHAA as an environmental factor suggest that DHAA significantly and level-dependently reduces circulating estrogen in certain fish species.

You should take Core Nutritionals Core Test once per day, everyday. For best results, take 1 scoop with your first meal of the day or 30-45 minutes Pre Workout.